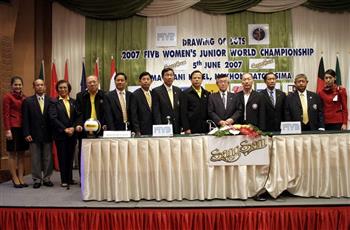 NAKHON RATCHASIMA, Thailand, June 5, 2007 - The 2007 World Women’s Junior Volleyball Championship, which will take place between July 20 and 27 in Nakhon Ratchasima, the biggest city in the North East of Thailand, has its challenges already designed. After the drawing of lots held today during the press conference, host country Thailand, Asian champions China, U.S.A. NORCECA winners, two-time African champions Egypt, Dominican Republic and Germany will play in Pool A, while defending and three consecutive time champions Brazil, European winners Italy, Japan, Puerto Rico, Croatia and Ukraine are in Pool B. The seating capacity of the MCC hall has been increased to 4.000, to please the enthusiasm of the Thai spectators.

Somporn Chaibangyang, vice president of the Thailand Volleyball Association, presided today over the press conference and the competition draw at the Sima Thani Hotel, which attracted a large crowd of media representatives not only from newspapers, but also sports magazines and television channels.

“Thailand was granted an opportunity to host the 2007 World Women’s Junior Volleyball Championship and Nakhon Ratchasima received a great honour from FIVB to stage the world-class competition this time,” said Somporn during the press conference.

“Hosting such a prestigious tournament, I think, will serve as a stepping stone of the city as in December they will stage the SEA Games, the biennial sports extravaganza of the 11-nation South East Asian region.

“This will be the third time that Thailand have a chance to host the World Women’s Junior Championship. In 1995, we hosted the top-flight competition for the first time in Bangkok, while Suphan Buri staged the 2003 edition. Nakhon Ratchasima is now the next Thai city to host the next month’s competition,” he added.

“We are best-prepared for the forthcoming World Women’s Junior Championship. The air-conditioned MCC Hall is always jampacked to its seating capacity of 2,500 whenever we host an international volleyball tournament,” Preecha said.

“To serve a great demand of spectators, we planned to increase the seating capacity from 2,500 to 4,000 by using more stands with movable seats. The tournament is a great one Nakhon Ratchasima’s residents and Thai spectators alike are looking forward to watching enthusiastically and it can be one of the most-watched tournaments Thailand has ever held,” he added.

TVA’s secretary-general Somkuan said that as Pool A teams will compete at The Mall Ratchasima’s MCC Hall, the 2,500-seater Chalerm Pharakiart Gymnasium will be the battleground for the Pool B side.

According to the draw results from today, hosts Thailand, Asian champions China, NORCECA winners the USA, two-time African champions Egypt, Dominican Republic and Germany are in Pool A, while defending and three consecutive time champions Brazil, European winners Italy, Japan, Puerto Rico, Croatia and Ukraine are in Pool B.

“The preliminary round will be held from July 20 to 24, with the semi-finals and the finals taking place on July 26 and July 27 respectively. Daily matches will start at 2pm Bangkok time, while local TV Channel 7, with the full support of Thai Beverage Marketing Company Limited, will televise one match live every day,” he said.

At The Mall Ratchasima’s MCC Hall, the host girls will play Egypt in the curtain-raiser on July 20, followed by the match between the USA and Germany and Dominican Republic against China, while at the Chalerm Pharakiart Gymnasium on the same day, Japan will open their campaign against Ukraine, followed by the match between Brazil and Croatia and Italy against Puerto Rico.